We already know the identity of Toyota’s first all-electric vehicle. The bZ4X SUV is expected in 2022, and moreover it will be accompanied on the market by a cousin produced by Subaru (the Solterra).

Of course, we still don’t know everything about this model, but we now know a little more than last week. Toyota has shared additional information on the first of several bZ (for Beyond Zero) models in the works. In addition, we can see the version close to production in pictures.

By the way, seven more electric bZ models will follow by 2025.

The format of the bZ4X is similar to that of the RAV4. However, its wheelbase is 6.3 inches longer and it is slightly longer and lower to the ground than the brand’s most popular model.

The bZ4X will be assembled on the e-TNGA electric vehicle platform that Toyota has developed in collaboration with Subaru. The images shown here are still of a prototype, but the production model should be a fairly close copy.

The bZ4x will be powered by a lithium-ion battery pack with a capacity of approximately 64 kWh. The single-engine version will offer a front-wheel drive configuration and 201 hp. A two-engine, all-wheel-drive approach will deliver 215 hp. In the latter case, the company promises a 0-100 km / h acceleration time of 7.7 seconds.

In terms of range on the European WLTP cycle, Toyota claims a range of 370 km for the front-wheel drive model and 322 km for the four-wheel drive version. There are few competitors currently on the market, but it will be necessary to see if a more powerful configuration will be reserved for North American models.

For energy recovery, Toyota explains that with a 150 kW fast charger, the bZ4X will be able to recover 80% of its battery in 30 minutes. Solar panels will be available for the roof and, according to the company, will help recover just over 1,600 km of range per year. 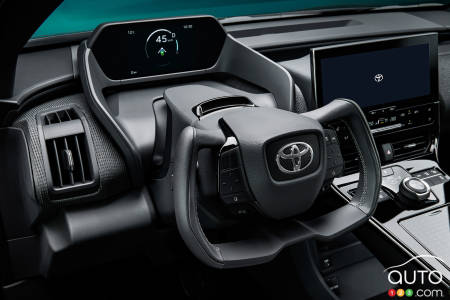 A gamer-style steering wheel will be available, much like the one found in the new Tesla Model S and X. However, there is one marked difference: its total rotation will be limited to 150 degrees using an electronic steering system. (without links) to rotate the wheels at the appropriate speed as directed by the driver.

In short, you shouldn’t have to cross your hands during tight or emergency maneuvers. Intriguing, but real, testing will be crucial, as none of this will feel natural behind the wheel to anyone who is used to driving with the help of a … traditional steering wheel. 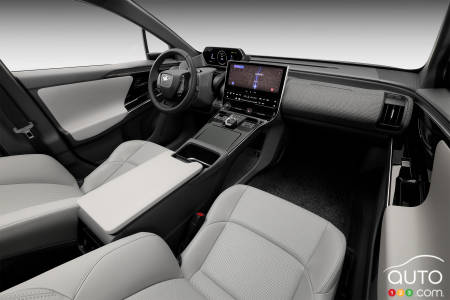 Toyota’s new multimedia system, which uses voice commands, will be accessible via a large central touchscreen. It will also benefit from live updates over time, so it should never be out of date.

By the way, this is going to become the industry standard. In fact, just this week, Volvo announced its first OTA updates with some of its vehicles.

And when will we have the Toyota bZ4X? Production of the electric vehicle is expected to begin in mid-2022, so we can expect to see it land in dealerships in late summer or early fall next year. 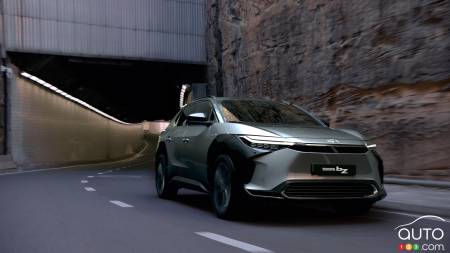 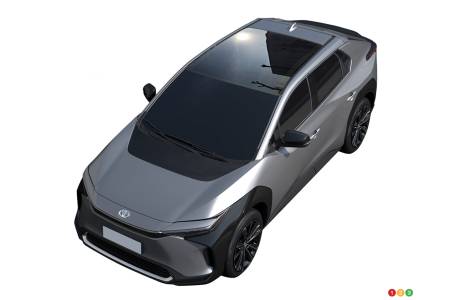 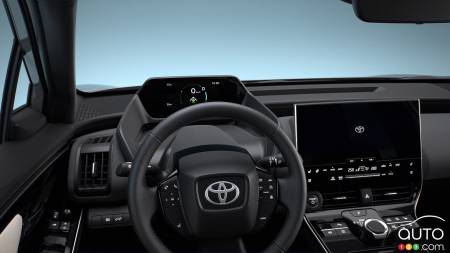 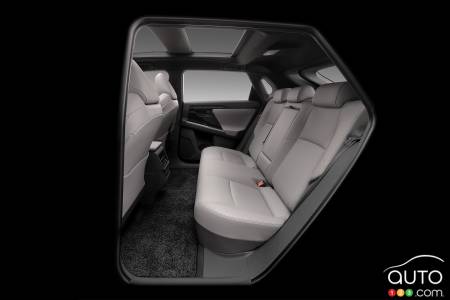